KATHMANDU/June 25: Media stakeholders of the Province 1 of Nepal have stressed on strengthening capacity of journalists and clarifying the roles and, responsibilities of media organizations to promote independent media.

The provincial and district chapters of the Federation of Nepali Journalists (FNJ) and Education Journalists’ Group as well as the newly formed Provincial Communication Academy (PCA) asked Media Action Nepal (MAN) during a webinar it organized on Friday, June 25, to conduct interactions, hold seminars and/or provide trainings to help them learn the best way to ensure professional safety of journalists in Province 1. 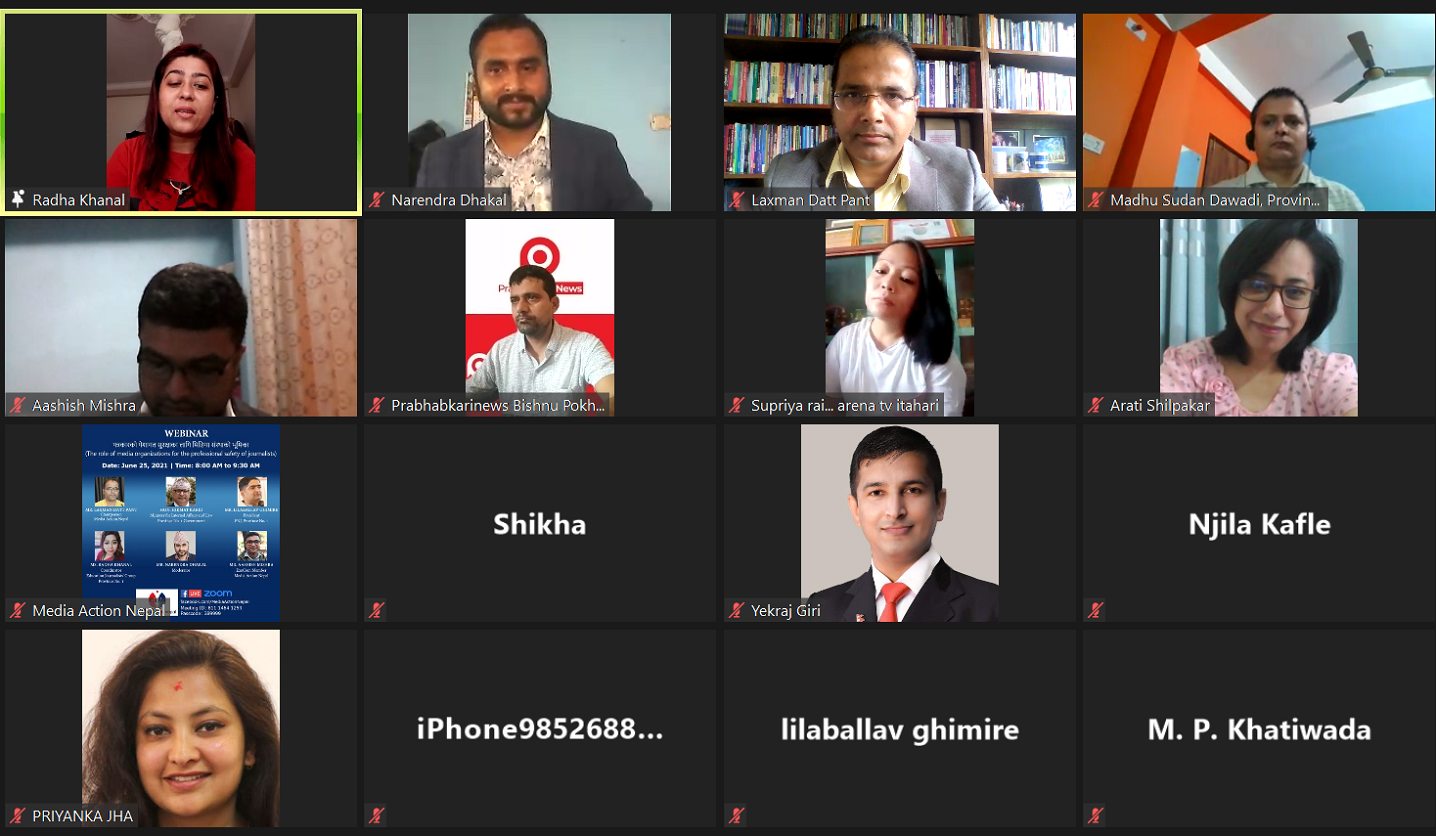 The webinar, moderated by MAN’s Province 1 coordinator Narendra Dhakal, focused on the role of media organizations for the professional safety of journalists. For the purpose of the virtual program, media organizations were defined as umbrella organizations, associations, professional bodies and state and non-state institutions, like FNJ, Press Council Nepal and the province’s Communication Academy, working for the rights and advocating for the interests of journalists.

Entering the topic, Aashish Mishra, member of MAN’s executive committee, questioned if, in seeking crisis relief and welfare measures from the government, media organizations had inadvertently been allowing media houses to escape their responsibilities to their reporters and making journalism too reliant on the very bodies they are supposed to be monitoring.

Radha Khanal informed that of the 200 women journalists of Province 1, only about 40% were actively working during the pandemic and only 25% were receiving regular salaries. “The already bad professional environment for female reporters was made worse by the COVID-19 pandemic,” she said. “As a result, many women journalists are now looking for other career options.”

Khanal urged media organizations to introduce targeted fellowship schemes to give women reporters an opportunity to learn while also sustaining themselves financially.

Lilaballav Ghimire shared that FNJ was confused about whether to help journalists or journalism. “If we are to help sustain journalism then we have to consider the hardships the media houses are facing as well. We have to acknowledge that there will be no journalism without news organizations. But we also can’t overlook the plight of the journalists who have been exploited,” he said. “Then, we also have the fact that 80% of the journalists affiliated with FNJ are also media owners.”

If we are to help sustain journalism then we have to consider the hardships the media houses are facing as well. We have to acknowledge that there will be no journalism without news organizations. But we also can’t overlook the plight of the journalists who have been exploited.

In Ghimire’s opinion, this confusion highlights the need to reform FNJ and its structures to be better suited to the times.

He also cautioned against seeking too much help from the government because, firstly, it must presently prioritize the life and safety of citizens over particular professions and secondly, it would be hypocrisy on the part of journalists to claim to hold the authorities to account while pleading with them for aid. Instead, Ghimire said, journalists should be provided education and training to make their content strong and sellable. “Professional security comes with strong journalists,” he remarked.

Giri from FNJ Jhapa questioned the silence of journalists. “Why do we accept unfair employment terms in the first place and even if we do, why don’t we speak up at some later point even when the exploitation becomes unbearable?” he questioned, stating that reporters hesitated to lodge official complaints or file formal applications against their mistreatment. He also said that professional bodies needed a clear policy to distinguish between working journalists and media-owning journalists.

Giri also praised MAN for its approach to training journalists and then following up on their progress. “Many of us receive training but don’t implement the skills learned. By following up and maintaining contact, MAN brings concrete changes in reporters and their work. I have seen this firsthand with my reporter Narendra Dhakal,” he said, referring to MAN’s provincial coordinator who is also working with the newspaper Purwanchal National Daily.

PCA member Kafle said that the behavior of private media should not be brought up until the government media cleaned up its act. “The government-owned media have themselves not implemented the minimum wage prescribed by the government. They themselves do not adhere to the Working Journalists Act. In such a context, how can we expect anything from the private media?”

Pant cautioned Province 1 media stakeholders about seeking too much government aid. This may hamper the media’s watchdog role, he said, while also stating that some help could be accepted in a way that would not interfere with editorial independence. He also asked the media organizations to provide legal aid to working journalists so they could take the necessary legal measures to ensure their rights and get media houses to fulfil their obligations regarding wages, benefits, insurance and safety.

He also requested media organizations to avoid partisanship and suggested journalists limit their political activities to their right to vote.

Noting the current letter forwarded by the Press Council Nepal to an individual for his social media post, Pant said media organizations should not regulate, let alone control, people’s personal expressions on social media as it infringed on the constitutionally guaranteed freedom of expression. Instead, they should take initiatives to increase media literacy among the people. 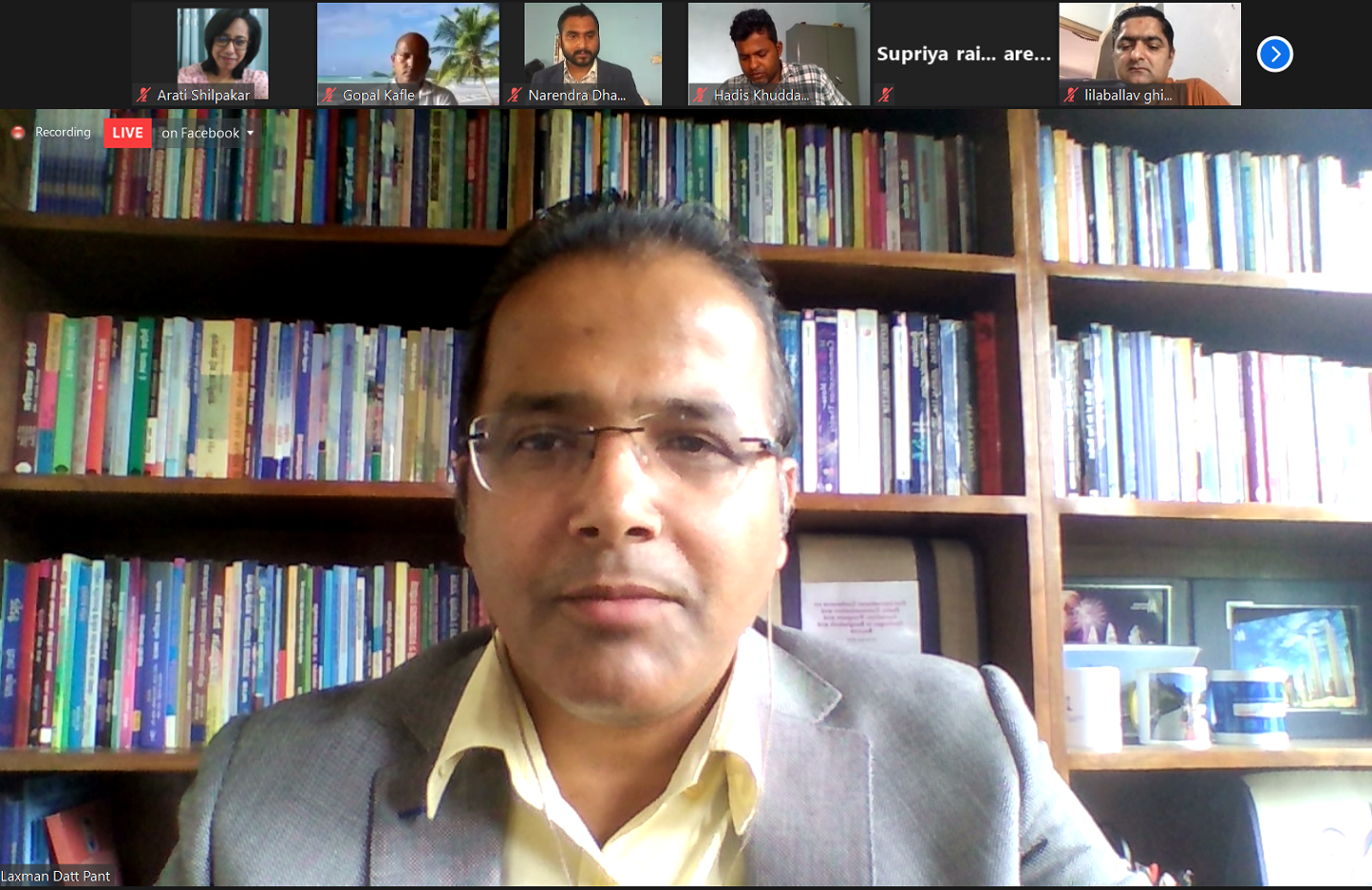 Noting the current letter forwarded by the Press Council Nepal to an individual for his social media post, Pant said media organizations should not regulate, let alone control, people’s personal expressions on social media as it infringed on the constitutionally guaranteed freedom of expression. Instead, they should take initiatives to increase media literacy among the people.

Minister Karki also shared Pant’s view regarding partisanship and worried that over-indulgence in politics had eroded professionalism in the press. He told the participants of the webinar about what his ministry has been doing to support and strengthen journalists, including women journalists, and informed them that the provincial government would soon begin drafting laws to institutionalize and promote professional safety in the media.

Although the Provincial Communication Authority was established as an autonomous entity, it is led by the Minister for Internal Affairs and Law. This has been highly criticized. Karki addressed these criticisms by saying that the ministerial leadership was only for a certain period of time to help the Authority develop its structures. “Once it finds its footing, the leadership will be transferred to media experts and the PCA will be made fully autonomous,” he assured. 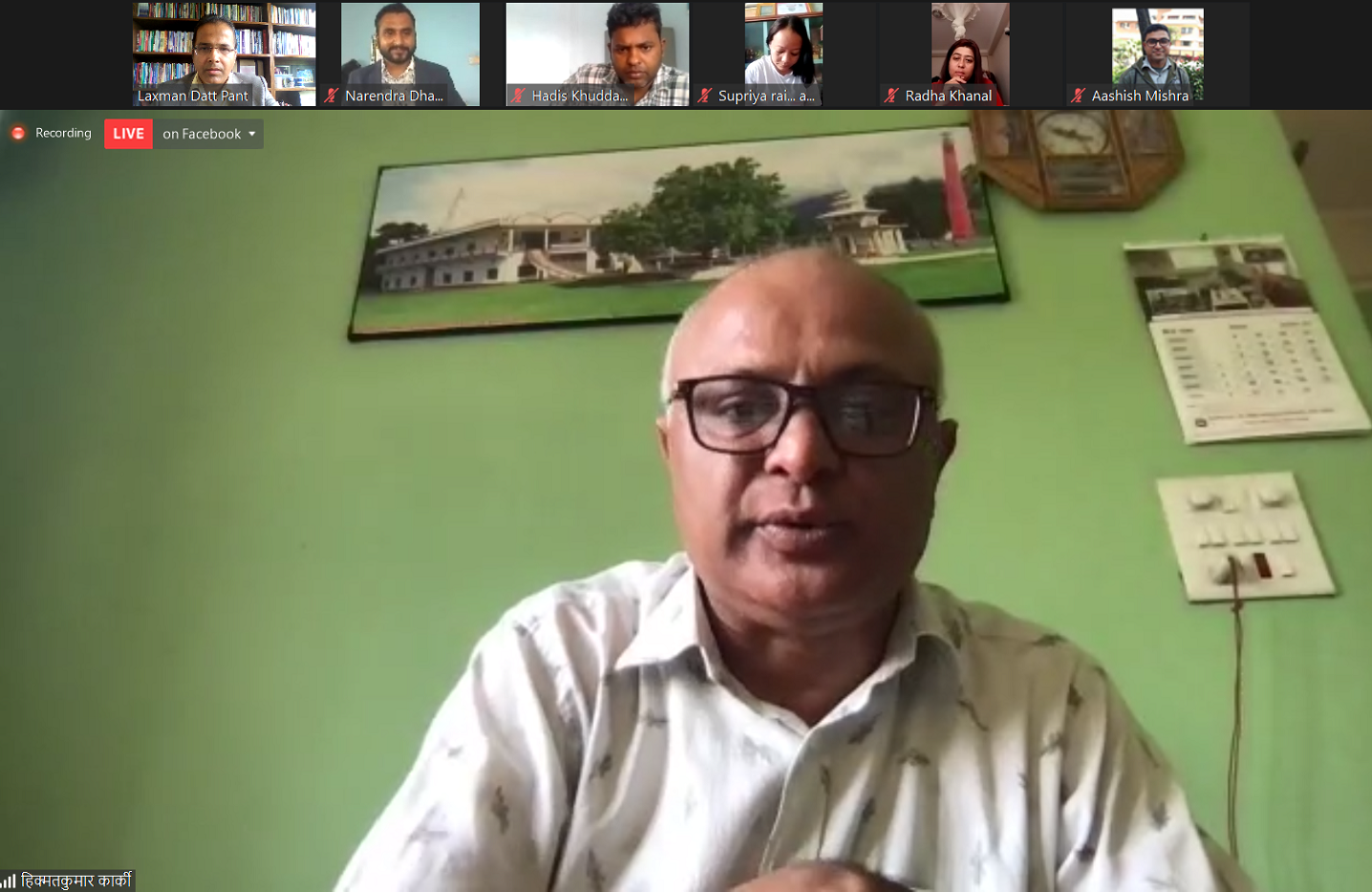 Furthermore, Karki made it clear that the provincial government would not start its own media. “All four state-owned media – Gorkhapatra, Nepal Television, Radio Nepal and the Rastriya Samachar Samiti have their presence in our province. We intend to help them grow while also supporting community and private news organizations.”

This webinar is part of a series of virtual interaction programs that Media Action Nepal is holding in each province, focusing on the various aspects of Nepali media and how they have been impacted by COVID-19. The series will conclude with the last webinar being held in Gandaki Province on Sunday, June 27.