Adhere to the code of conduct to enhance media’s credibility

Adhere to the code of conduct to enhance media’s credibility

KATHMANDU: Journalists should learn and strictly adhere to their professional code of conduct to enhance the media’s credibility. Media stakeholders, including officials from the Federation of Nepali Journalists (FNJ), stressed this while speaking at the Karnali provincial level webinar on ‘Journalist Code of Conduct and the Credibility of Media’ organized by Media Action Nepal (MAN) on June 14, Monday. 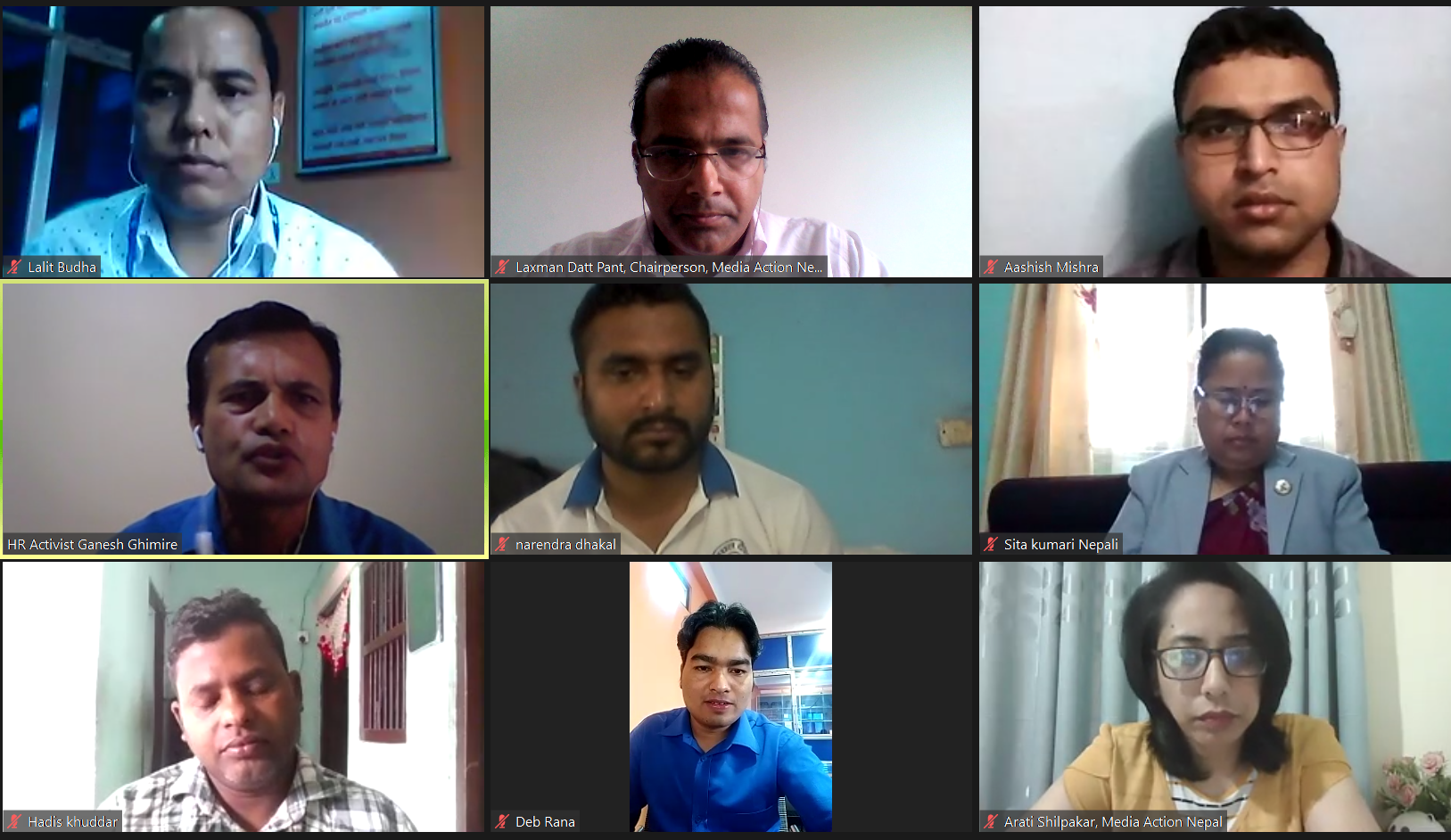 Karnali Province’s Minister for Internal Affairs and Law Sita Kumari Nepali, MAN Chairperson Laxman Datt Pant, Head of the Department of Journalism at Mid-Western University Yubaraj Sharma, Provincial President of the Federation of Nepali Journalists Deviram Devkota and Advocate and Human Rights Activist Ganesh Prasad Ghimire shared their insights and observations in the webinar moderated by MAN Karnali Province Coordinator Lalit Budha where they talked about the implementation of the journalist code of conduct in the province and the state of media.

Sharma shared that the media in Karnali still had some way to go because many districts in the province still don’t have local publications. He also observed that the media did not maintain a balance between news, views and advertisements in their content and often copied from other sources without providing due acknowledgement.

Devkota informed that most of the online portals operational in the province were found to be violating the code of conduct in the name of breaking the news first. He also said people with political and other affiliations were entering journalism without any credentials or knowledge of media ethics and called for a mechanism to filter genuine reporters from the crowd. 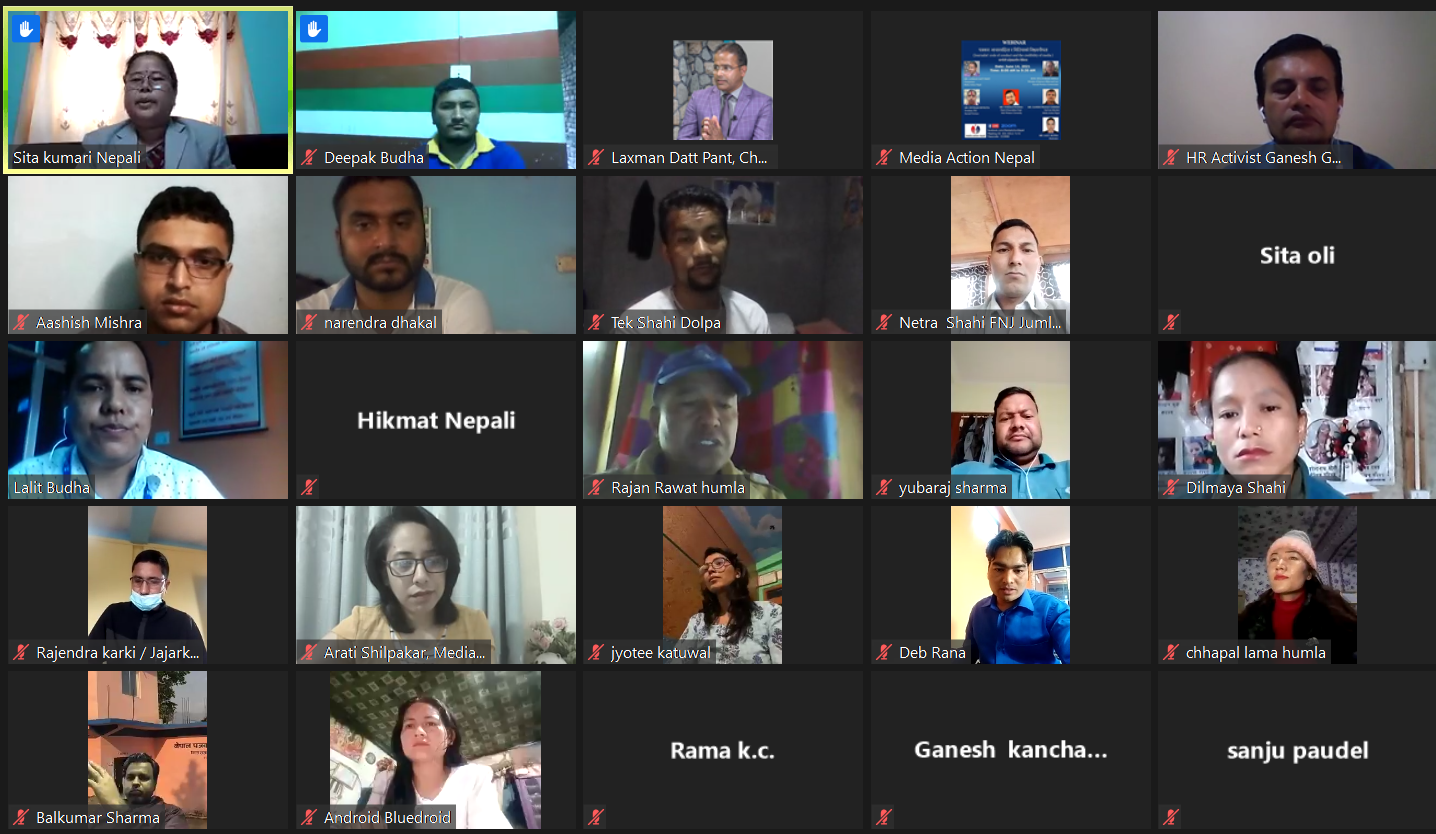 Devkota also highlighted some of the challenges the media in the province have been facing, namely, unreliable power supply, lack of investment and manpower, unhealthy competition, inability to carry out public service journalism, minimal presence of the Press Council Nepal and other government bodies and YouTube and social media bringing down media credibility. He also called on the provincial government to ensure a proportionate distribution of public service advertisements to all the media and introduce schemes to support local news organizations and journalists.

Similarly, Minister Nepali called journalism essential to development, especially in an under-developed region like Karnali and shared her observations on how media in the province has grown and matured since the implementation of federalism in the country. But she lamented the fact that journalism was still biased and lacked investigations and requested the media personnel to never compromise on their professional code and ethics.

For the government’s part, Nepali expressed commitment that the provincial government would work towards building the capacity of community media, ensuring the health and safety of working journalists and establishing a Mass Communication Academy in Karnali. She asked MAN, FNJ and other concerned organizations to look into the issues of women journalists too.

Chairperson Pant asked the provincial and local governments to be mindful of Nepal’s national and international obligations while drafting media laws. He also informed everyone that journalists had to mandatorily adhere to the code of conduct which is enforceable upon them as professionals. He also stated that any person wishing to enter journalism must first familiarize himself or herself with the code. 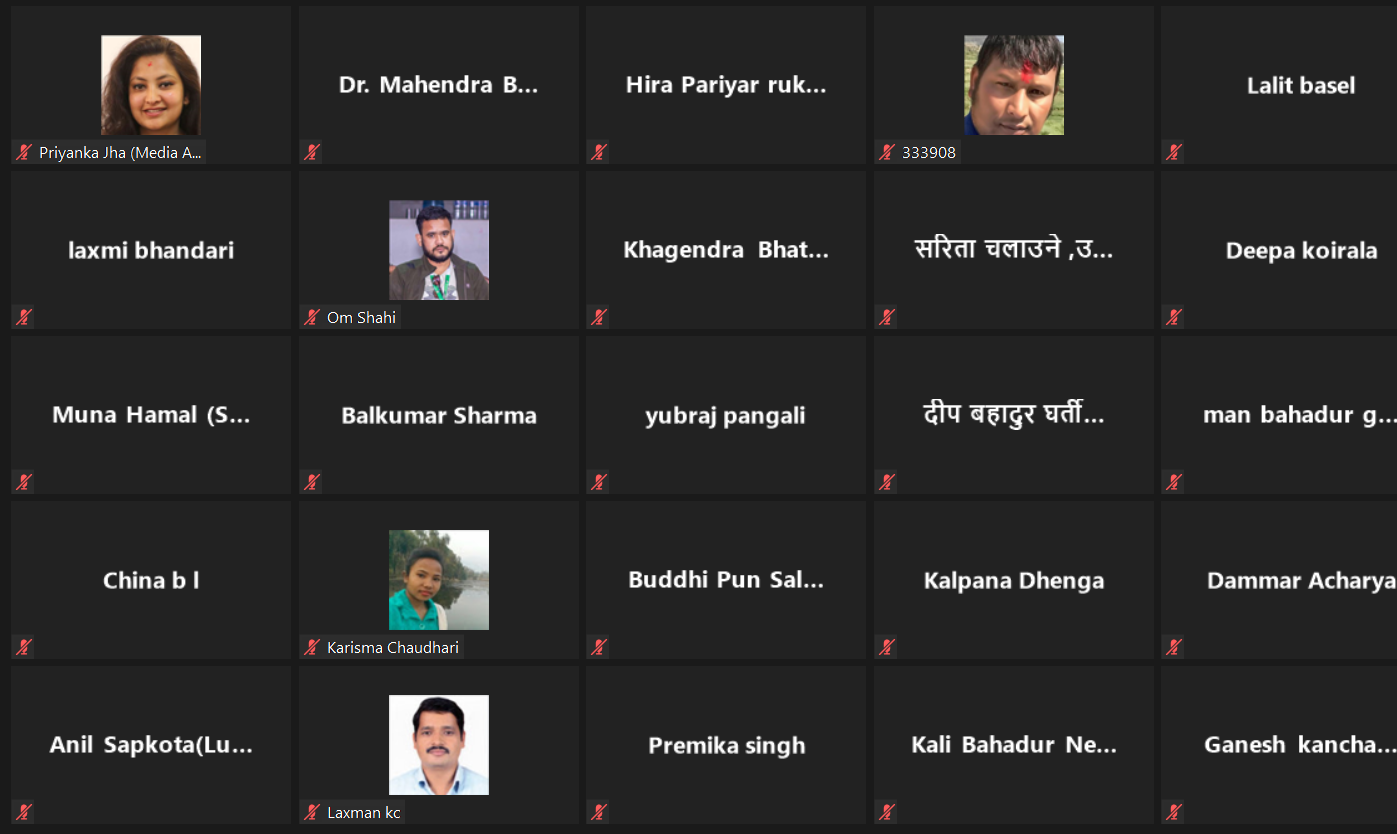 When the floor was opened to the participants, many of them raised questions about the Public Procurement Act, saying it went against the spirit of decentralization and kept resources out of the reach of local media. They also complained that advocacy organizations had not been focusing on media sustainability as a huge challenge to journalism in Karnali. A few also stressed the need to organize training on skill enhancement and news presentation to improve professionalism in journalism.

This webinar is part of a series of virtual interaction programs that Media Action Nepal is holding in each province from June 12 to June 25, 2021, focusing on the various aspects of Nepali media and how they have been impacted by COVID-19. The next Lumbini province-level webinar will be held on Wednesday, June 16.