KATHMANDU/June 27: Digital media literacy is not just an issue that concerns media personnel but everyone in the society, stressed Minister Kumar Khadka of the Gandaki provincial government and other media stakeholders who spoke at the webinar on digital media literacy to prevent misleading information organized by Media Action Nepal (MAN) on Sunday, June 27.

In her welcome address, MAN’s secretary Arati  Shilpakar said the digital space provided a great opportunity to connect the world, but it poses a threat to the digitally illiterate Nepali audience. Bimala Bhandari, President of the Kaski district unit of the Federation of Nepali Journalists (FNJ), called digital media literacy a vital tool to identify and stop the spread of mis- and disinformation through online spaces. While she expressed happiness at the improving state of digital media literacy in Nepal, she stressed that much remains to be done and asked for further discussions to be held on the matter. She also asked the provincial government to invest more in digital media education. 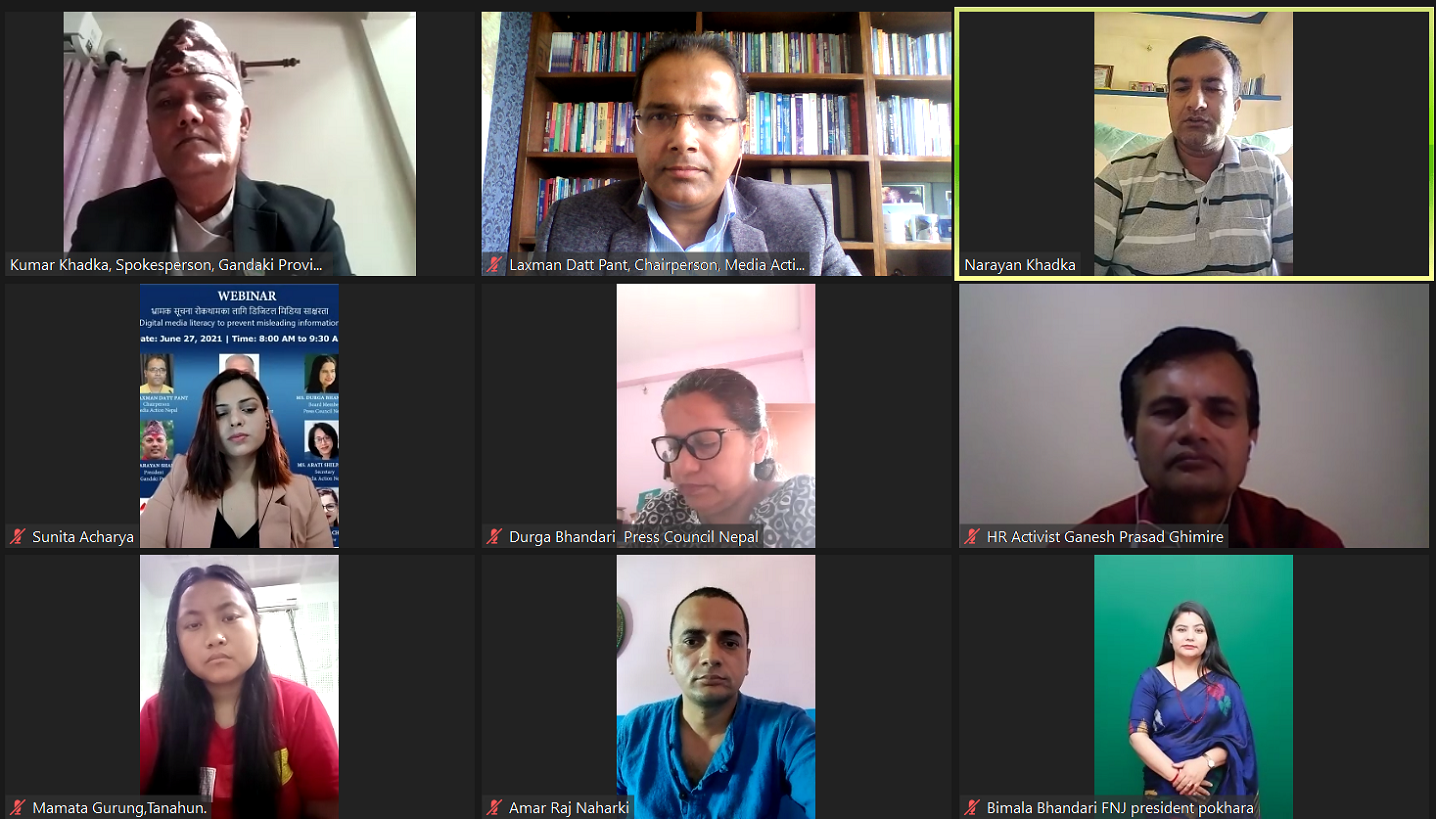 Narayan Sharma, President of FNJ Gandaki, warned that the instant nature of digital media allowed misinformation to spread rapidly and urged online portals to exercise restraint and adhere to the journalists’ code of conduct when writing and posting news. He urged all reporters to verify all information and bring facts and opinions from the correct subject experts in their news. The responsibility to curb fake news lies with the media, he said.

Instant nature of digital media allow misinformation to spread. The  online portals should exercise restraint and adhere to the journalists’ code of conduct when writing and posting news. Also, reporters  should verify all information and bring facts and opinions from the correct subject experts in their news. The responsibility to curb fake news lies with the media.

Durga Bhandari, Board Member of the Press Council Nepal (PCN), also spoke in the virtual program, held via Zoom, worried that the lack of digital media literacy was leading to abuse of the reach of social media, which in turn, was leading society down the wrong path. She expressed that the PCN was willing to work to expand digital media literacy among journalists and news organizations but was limited in what it could do because of old laws. “The technology has advanced so much while our laws have not,” she said.

Working journalists, heads and deputy-heads of various press-related organizations and representatives of FNJ from all the 11 districts of Gandaki Province were among the 45 people who participated in the webinar on Zoom. Bhandari told all of them that the credibility of news was threatened by the misleading content on social media platforms because the laypeople could not distinguish between the two. “That is why interactions like this one are necessary to raise the level of digital media literacy at the community level,” she said.

MAN Chairperson Laxman Datt Pant shared findings of a previous research by Media Action Nepal which found that 3.7% of the content of Nepali media was misleading. So, misleading news is not as big a problem as some parties point it out to be. However, it is also not non-existent and work needs to be done to eliminate it, mainly through media literacy.

Furthermore, since the pandemic had pushed the world to embrace digital means of communication more comprehensively than before, the need of the time is digital media literacy, Pant said. “In this regard, regulatory bodies like the PCN seem unaware about who to approach and how,” he mentioned. “Media should not be trying to regulate social media; it is just not possible. They should, instead, focus their resources on educating reporters and editors.”

Since the pandemic had pushed the world to embrace digital means of communication more comprehensively than before, the need of the time is digital media literacy. In this regard, regulatory bodies like the PCN seem unaware about who to approach and how.  The focus of media houses and organizations should be on  educating reporters and editors. 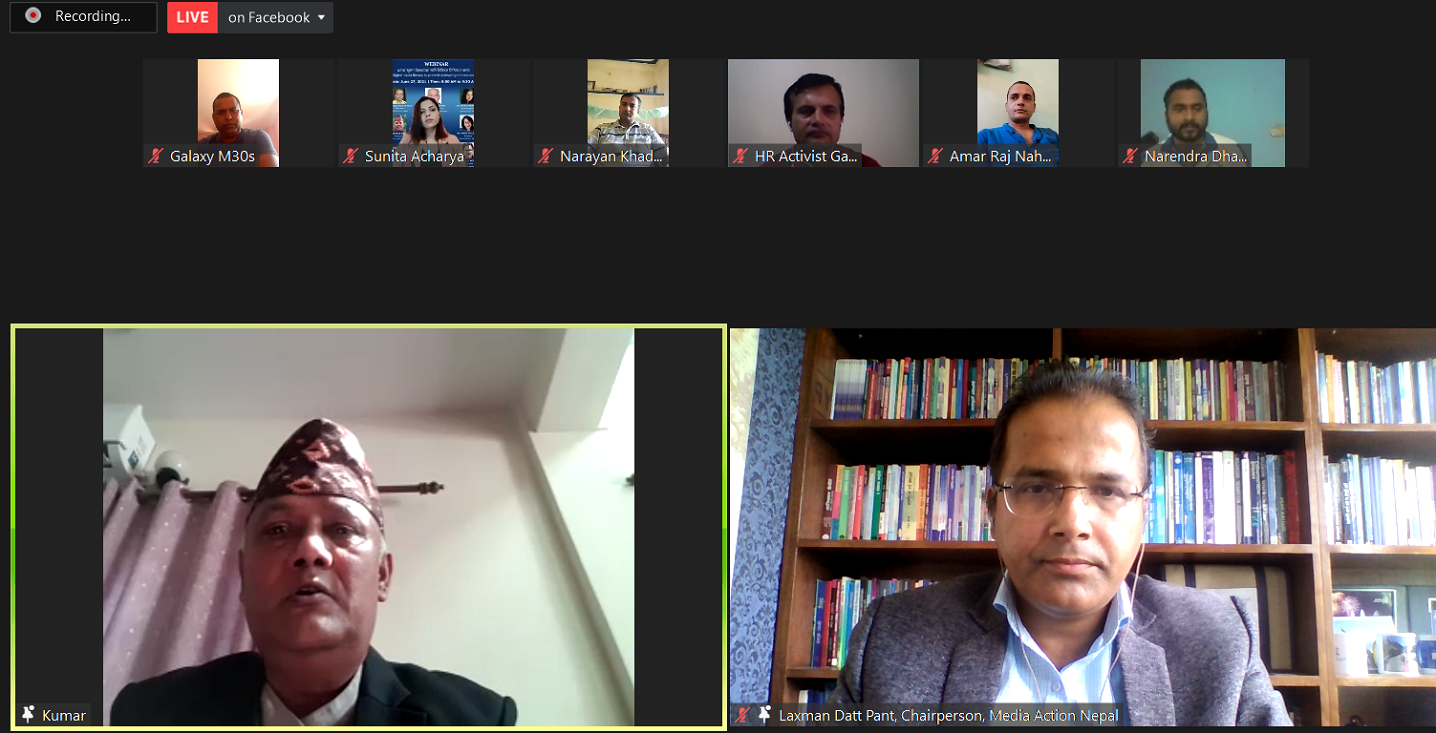 Pant lamented how many media personnel did not even know the distinction between the basic concepts of mis-, dis- and malinformation.

He also urged provincial governments and lawmakers to hold extensive discussions and make a clear mandate before establishing any media institutions and introducing any media-related laws.

Minister Khadka urged the media of the province and the country to be aware of their responsibility to society and not spread “fake news.” He also asked the media to occasionally present positive news to prevent society from falling into despair. Most importantly, Khadka made it clear that the executive should not regulate or control the media. “Media literacy and other media-related issues are for the media themselves to handle. If needed, PCN can go in. The judiciary is also there to uphold legal principles. The government should not step in,” he stated. 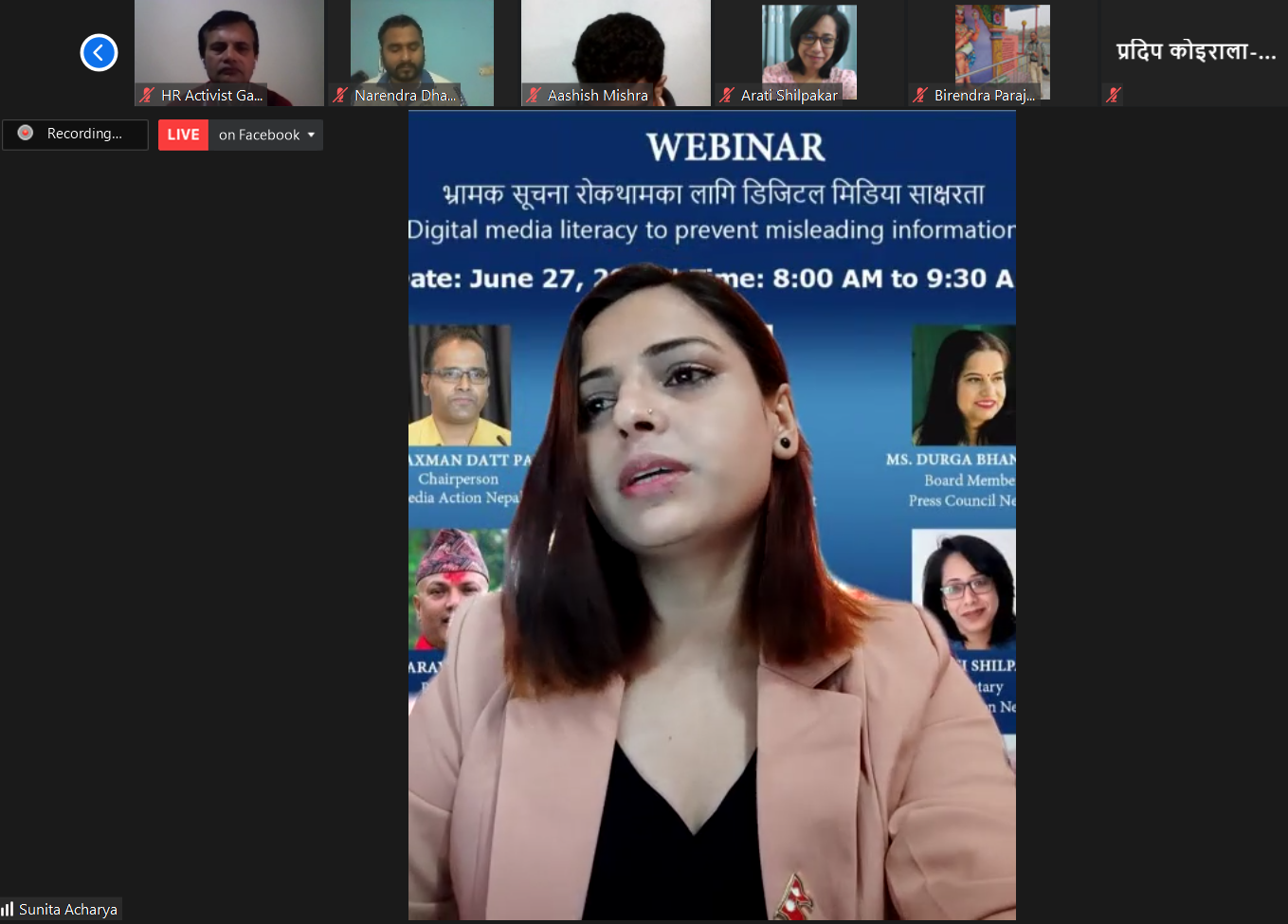 Moderated by MAN’s Gandaki Province Coordinator Sunita Acharya, this webinar was the conclusion of a series of virtual interaction programs Media Action Nepal held in each province from June 12 to June 27. The webinars focused on how various aspects of Nepali media had been impacted by COVID-19.